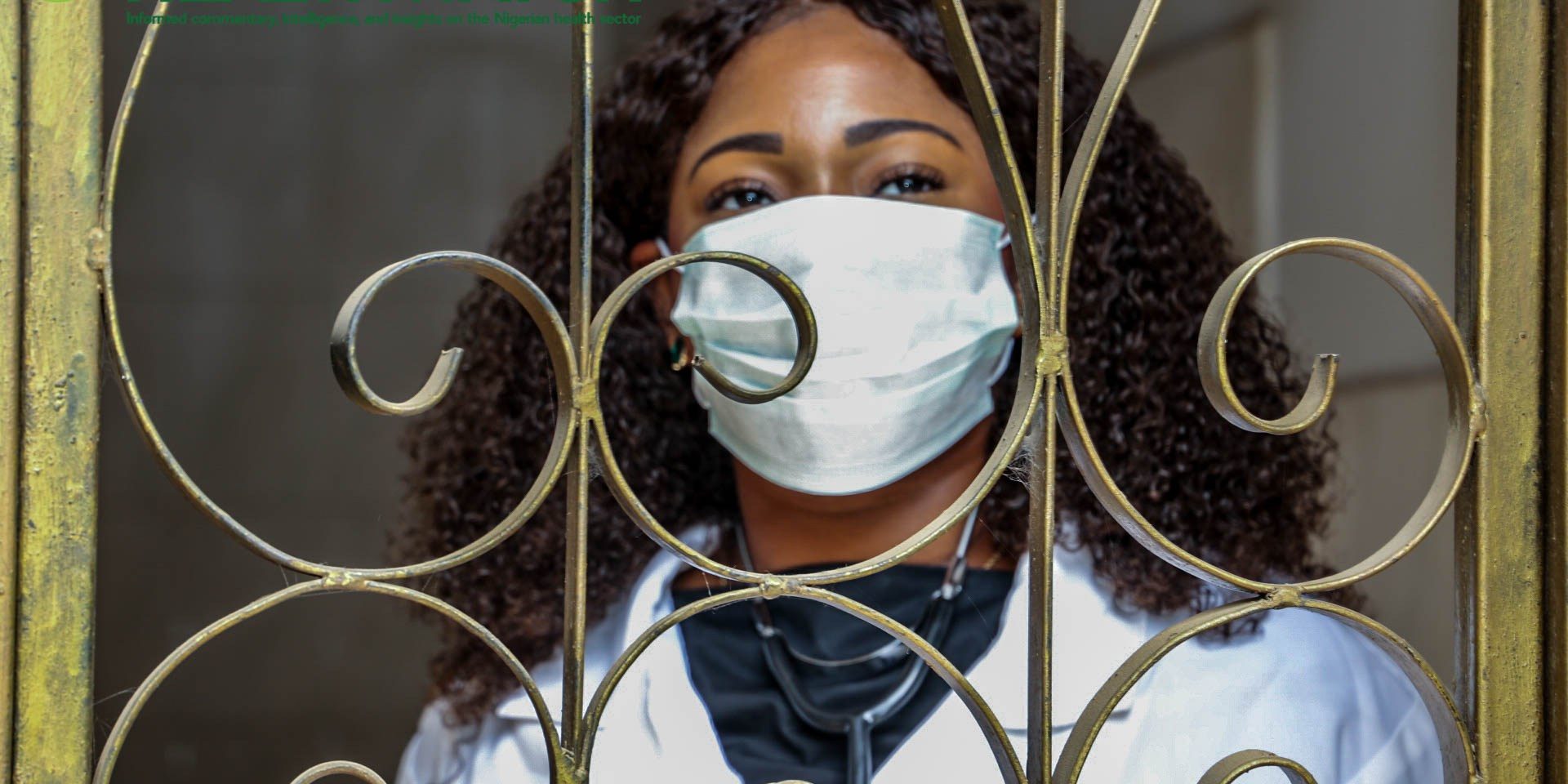 A one-year-old child with suspected measles is lying in one of the small rooms outside the emergency paediatric unit of the General Hospital, close to the Emir’s palace in Katsina city. He was brought in two days ago and is surrounded by his mother and two other relatives. The boy is just one of the many children that have presented with the same condition in the last year, according to the nurse on duty. The acting state coordinator of the World Health Organisation in Katsina, Dr. Emanuel Okpe, who supported the Katsina State Epidemiology team says there were close to 40 confirmed incidents of measles in the state between January and November 2018.
Measles is one of the epidemic prone diseases that we should really not be finding in Nigeria given that we have a very effective vaccine, available at no cost to patients in every public health care centre in Nigeria. However, these cases and outbreaks continue to happen, in addition to others, for which there is no effective vaccine. In 2012 Nigeria experienced a deadly Lassa fever outbreak in 19 out of the 36 states, claiming 70 lives, including 7 health workers. Between January and March 2015, an outbreak of meningitis killed 50 people in two states of Kebbi and Sokoto. The country has its work cut out for it to prevent, detect and respond to infectious disease threats.
Image credit: Nigeria Health WatchAt the national level Nigeria has made some progress in efforts to prevent and manage infectious disease outbreaks and to a large extent, infectious disease epidemics. In 2011 the country established the Nigeria Centre for Disease Control (NCDC) with the purpose of preventing, detecting and responding to infectious diseases. However, for every outbreak or epidemic, there is a household and a community where it originates, usually as a rumour before escalating to other communities, towns and states. The states are critical stakeholders in the drive to prevent epidemics, presenting the small window of opportunity to stop infectious diseases at source, before they spread. For vaccine preventable diseases, the National Primary Heathcare Development Agency has been pushing very hard to increase routine immunisation coverage rates in the country. Again, the work of actually delivering the required vaccines can only be carried out by healthcare workers employed by states.
Katsina State experiences frequent occurrences of infectious disease outbreaks, mostly meningitis and cholera. According to the NCDC’s situation report for meningitis, Katsina recorded 86 suspected cases between September 2017 and January 2018. Katsina was also  among the five states in Nigeria where meningitis outbreaks reached epidemic levels between 2016 and 2017. The state also frequently features in the agency’s weekly epidemiological report for cholera. Permanent Secretary, Katsina State ministry of health, Dr. Kabir Mustapha, said the state recently battled an 11-month cholera outbreak, from November 2017 to October 2018, with the support of Medicines San Frontiers, which built two temporary isolation centres in two local government areas. The state was also not spared in the 2016 Lassa fever outbreak in the country, reporting two deaths.
Control of outbreaks and epidemics is a task that requires a multifaceted approach and significant resources. For prevention, the public must be provided with knowledge that an outbreak could occur as a result of certain lifestyles. At the time of the outbreak, people must be informed about what they should do to protect themselves, while those infected must be able to access the standard treatment they require, preferably in a sterile, isolated place where the risk of spreading the infection is very low. There must also be a point of coordination among various stakeholders, where needs, responses and progress are monitored. All these efforts require adequate funding.

For a state like Katsina which is prone to outbreaks and whose economy is not among the biggest in the country, it becomes incredibly important to maximise available resources, and also to invest strategically.  Dr. Mustapha says Katsina continuously educates its citizens about the most frequently occurring infectious disease outbreaks through its traditional and religious leaders. The state also has an Emergency Operations Centre (EOC), which manages and coordinates responses to outbreaks of infectious diseases at the state level and serves as a link with federal agencies and partner organisations. However, the state is lacking one critical component for fighting infectious disease outbreaks – standard, well equipped treatment and isolation centres.
Infectious disease treatment and isolation centres are designed to manage individuals who have been confirmed or are suspected to be infected with a particular infectious disease, so as to prevent them from transmitting this to other healthy individuals. The centres are set up to provide medical care to the individuals, and to monitor progress in their treatment. Isolation centres play a pivotal role in preventing an outbreak from progressing into an epidemic and limiting the number of casualties as a result of the outbreak.
Entrance gate of General Hospital Katsina. Photo source: Nigeria Health WatchIn 2014 when the Ebola Virus Disease (EVD) spread across West Africa, Nigeria became a model in the world for successfully pushing back the scourge, thanks in part to the rapid establishment of two isolation centres in Lagos and Port Harcourt, where persons infected were managed, while protecting the general society from being exposed. Kigoma region in Tanzania experienced an unprecedented outbreak of cholera in 2015, and isolation of patients proved key in containing it. Although the outbreak was largely as a result of influx of refugees from neighbouring Burundi, the government with support from World Health Organisation (WHO) set up an isolation centre where patients were managed and rehydrated, while ensuring good infection control. A study published by the Public Library of Science in 2017 found that availability of Ebola management centres (special Isolation centres for Ebola Virus Disease) at strategic locations within Tonkolili district in Sierra Leone was significant in reducing the number of Dead on Arrival and delays of admissions of people infected with the disease during the 2014 West Africa Ebola Epidemic, which could have contributed in reduced community transmission of the disease in the region. Another study published by the Royal Society indicated that expansion of an Ebola treatment centre from 10-bed facility to 100-bed facility in Lofa County in Liberia contributed in mitigating the epidemic and eventually stopping it in that region in 2014. On a larger scale, the Morbidity and Mortality Report of January 30, 2015 by the United States Centre for Disease Control showed that placing Ebola patients in Ebola Treatment Units prevented an estimated 9097 new cases of the disease in Liberia between September 23 to October 31, 2014, a period of just six weeks.
Inside the uncompleted isolation unit outside the male ward of General Hospital Katsina. Photo credit: Nigeria Health WatchA 2015 research titled ‘The Economics of Epidemic Diseases’ by the University of Siena in Italy and published by the Public Library of Science concluded that in countries with limited resources, infectious disease epidemics have better chance of being eradicated when efforts are geared towards isolation of patients that have already being infected with the disease. When standard isolation centres are in place, the spread of the epidemic is largely minimised, translating to less devastation, and more lives saved. In its 2017 Guideline for the Prevention and Control of Viral Haemorrhagic Fevers such as Lassa and Ebola, the NCDC recommends isolation of all suspected or confirmed cases as one measure to take in case of a disease outbreak.
General Hospital Katsina is the biggest state government owned health facility in the state. It sits on a large property with well-built structures that include wards, a laboratory, accident and emergency unit and an administrative block, but lacks a proper and standard treatment and isolation unit. Health workers in the hospital confirmed that the ward that is to serve as an isolation unit is yet to be completed. Not only is the general hospital lacking an isolation unit, there appears not to be a permanent unit in the entire state.  Dr. Mustapha said the state carved out a temporary isolation unit at the Vesico-Vaginal Fistula (VVF) Centre in Katsina city during the Lassa Fever outbreak in 2016, but the facility was neither upgraded to a permanent one nor maintained after that.
Edo State, which shares the same peculiarities with Katsina in terms of infectious disease outbreaks, recently commissioned a treatment and isolation centre to help the state tackle the frequent outbreaks. This centre will aid the work of Irrua Specialist Teaching Hospital (ISTH), which serves as referral point for Lassa Fever in the state and the country. Edo State’s initiative is a good model for other states to follow, and particularly for Katsina, being a hotbed of outbreaks of meningitis, cholera and measles.
Katsina State seems to be taking some steps in the right direction. Dr. Mustapha said the state government is planning to build a world class infectious disease hospital, subject to acquiring a credit facility from the Islamic Development Bank. He also believes that the contingency fund of two hundred million naira set aside by Katsina State in 2018 for response to infectious disease is a good start and emphasised the state government’s plan to do the same in 2019. Citizens of the state should hold their leaders accountable to ensure that these funds earmarked for infectious disease prevention are used accordingly.
If the state is able to follow through with these plans and put in place functional permanent isolation centres, in the future Katsina residents who find themselves infected with diseases will be able to receive adequate care in isolation, without posing risks to others. Successful containment of an outbreak at the state level would have far reaching implications for the nation at large, allowing Nigeria to better prevent infectious disease epidemics from occurring.