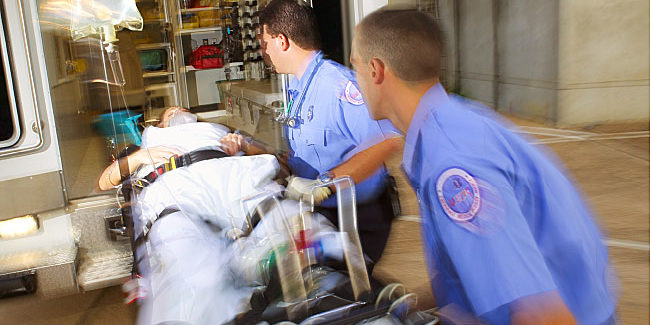 FRIDAY, Feb. 1, 2019 (HealthDay News) — Paramedics have a “remarkably low” rate of compliance with hand hygiene standards, which could put patients at risk for deadly infections, according to a new report.
For the study, researchers observed 77 paramedics in Finland, Sweden, Denmark and Australia as they dealt with 87 patients. The paramedics’ compliance with basic hygiene was high: short, clean nails (83 percent); hair short or tied back (99 percent); no jewelry worn (62 percent).
But many ignored World Health Organization guidelines in five situations when cleansing with soap and water or an antiseptic rub is needed. Too many relied instead on gloves, suggesting they care more about protecting themselves than patients, the study authors said.
“[Hand hygiene] is about preventing the spread of microbes and thus protecting the patient. Whereas the use of gloves primarily is about protecting oneself from bodily fluids,” lead study author Heidi Storm Vikke, of the University of Southern Denmark in Odense, and colleagues explained.
In more than 1,300 instances where cleansing was required, overall compliance was 15 percent, according to the report published online Jan. 28 in the Emergency Medicine Journal.
The researchers also found significant variation from one situation to another. Compliance figures were as follows: 3 percent before touching the patient; 2 percent before any “clean” procedure, such as an injection or cleaning a wound; 8 percent after contact with bodily fluids/wounds; 29 percent after touching the patient; and 38 percent after handling the patient’s belongings or anything in the immediate vicinity, such as the stretcher harness.
Paramedics used gloves in 54 percent of recommended instances. They donned new gloves before touching patients 48 percent of the time, but for only 14 percent of “clean” procedures, the findings showed.
And paramedics often used the same pair of gloves after touching a contaminated site and touching the patient for the first time (21 percent) or before a “clean” procedure (64 percent), the study authors said in a journal news release.
Paramedics also wore gloves when there was no obvious need — for example, no risk of bodily fluids. When they wore gloves, proper hand hygiene protocol was followed only 2 percent of the time, compared with 30 percent when they did not wear gloves, the study found.
The authors said their findings suggest the need for further research into why health providers may not follow hand hygiene protocols.
Healthcare-associated infections affect up to one in 10 patients in developed countries.